Numerology can be defined as the study of the purported divine, mystical, or other special relationship between a number and some coinciding observed (or perceived) events. Numerology is often associated with the paranormal, alongside astrology and similar divinatory arts.

You might ask what numerology has to do with investing. I’d say it has about as much to do with investing as astrology (there are, in fact, many Internet sites that provide investment advice based on astrological forecasts, as silly as that sounds). Yet whenever major stock market indices cross new thresholds, the financial media tries to attach some special meaning to the event. Pundits are brought on to provide their unique insights into what their crystal balls are telling them.

This week, Nov. 18 was a field day for investment numerologists as the S&P 500, for the first time crossed the 1,800 level, and the Dow Jones industrial average crossed the 16,000 level. And now, many of those same gurus are busy commenting on what the failure of both indices to stay above those “magic numbers” portends.

Yet, it’s important that you should totally ignore all their forecasts. As Warren Buffett warns, these so-called experts will tell you absolutely nothing about where the market is going, but they do tell you a lot about the person. The following is a perfect example of why you should follow Buffett’s advice, as well why it’s important to understand that “you can torture the data until it eventually confesses” — and confessions acquired under torture are worthless.

In early 2012, while eating breakfast and watching CNBC, I listened as the host discussed the fact that the S&P 500 Index closed 2011 virtually exactly where it had started. Including dividends, the return was just over 2 percent. The host then noted that in the past when the market was flat, the following year was a great one for investors. She asked the guest “guru” about that. And the guru confirmed her statement, implying 2012 was likely to be a great year for investors.

When I hear comments like this, I like to go check the data. If we consider that a flat year would be total returns of between -3 percent and +3 percent, we find that since 1961, the return of the S&P 500 Index fell within that range exactly one time. That was 1994, when it returned 1.3 percent. The next year it returned 37.6 percent. So we have a grand sample of one.

The table below covers the full 85-year period from 1926-2010, but it only displays the five years when the total return of the S&P 500 Index fell between -3 percent and +3 percent.

While the average return in the year following a “flat” year was 31 percent, one should not place any significance to the data. One reason is that we just don’t have enough data points — the sample size is too small.

The other reason is a little less obvious. Since we know today that the S&P 500 has provided an average (not compound) return of about 11.8 percent, and we are only looking at years with returns well below that, the remaining 80 years in the period must have provided even higher returns than 11. Identifying patterns that worked in the past doesn’t necessarily provide you with any useful information about stock price movements in the future. As Andrew Lo, a finance professor at MIT, points out, “Given enough time, enough attempts, and enough imagination, almost any pattern can be teased out of any data set.”

For those interested in numerology, the table below shows the annualized gain in years where the S&P 500 hit a new milestone (special thanks to Howard Silverblatt, senior index analyst at S&P, for providing the numbers). Not much of a pattern here. 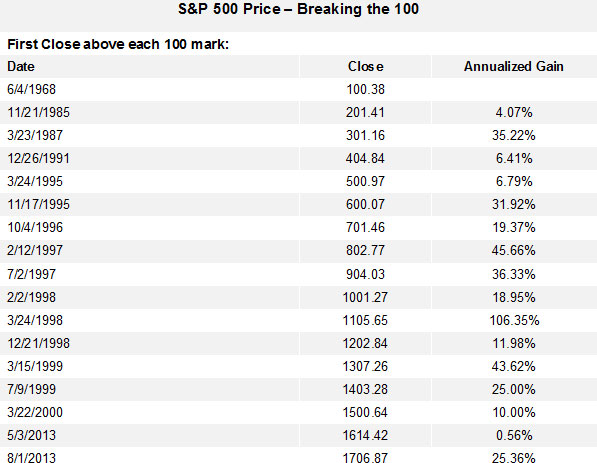 As Nobel prize-winner Daniel Kahneman demonstrates in his book, “Thinking, Fast and Slow,” as human beings we are virtually hard wired to make mistakes such as extrapolating from small samples and seeing patterns where none actually exist. Among the keys to being a successful investor are to be aware of such cognitive biases.

This commentary appeared November 20 on Larry’s blog at CBSNews.com.

The opinions expressed by featured authors are their own and may not accurately reflect those of the BAM ALLIANCE. This article is for general information only and is not intended to serve as specific financial, accounting or tax advice.

Larry Swedroe is Chief Research Officer for the BAM ALLIANCE.

Previously, Larry was vice chairman of Prudential Home Mortgage. Larry holds an MBA in finance and investment from NYU, and a bachelor’s degree in finance from Baruch College.

What Wall Street Doesn’t Want You to Know (2001)
Rational Investing in Irrational Times (2002)
The Successful Investor Today (2003)
Wise Investing Made Simple (2007)
Wise Investing Made Simpler (2010)
The Quest for Alpha (2011)
Think, Act and Invest Like Warren Buffett (2012)
The Incredible Shrinking Alpha (2015)
Your Complete Guide to Factor-Based Investing (2016)
Reducing the Risk of Black Swans (2018)
Your Complete Guide to a Successful & Secure Retirement (2019)

The BAM ALLIANCE does not endorse or make any claims about the accuracy or content of the information contained therein. The security and privacy policies on these sites may differ from the BAM ALLIANCE.

The opinions expressed by featured authors are their own and may not accurately reflect those of the BAM ALLIANCE. Articles are for general information only and is not intended to serve as specific financial, accounting or tax advice.

Income Planning and IRMAA in Retirement

No events scheduled at this time.